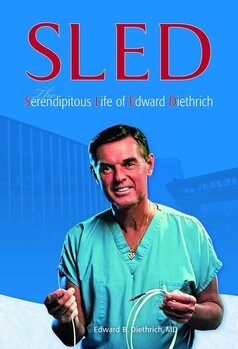 “The SVS Medal for Innovation in Vascular Surgery was established in 2006 and since then it has been awarded to four distinguished, extremely talented pioneer vascular surgeons. This award is given to an individual or individuals whose contribution to vascular surgery has had a transforming impact on the practice or science of vascular surgery. This year I have the privilege of introducing the fifth recipient of this prestigious award.”
“He has had a distinguished career as an extraordinary vascular and cardiothoracic surgeon, leader, and innovator. The list of innovations attributed to him is long, starting in 1962 with invention of the sternal saw for opening the chest and continuing with his legacy of establishing and directing an internationally known Heart Foundation and Heart Institute.”
“He has been a pioneer; a mover and shaker in the endovascular revolution, and his contribution to surgical education has been legendary. He organized the first live telecast of open-heart surgery to an international audience. His annual endovascular meetings have attracted physicians from all corners of the world. The educational value of his presentations has been unique. The large number of live telecasts he includes in these meetings has contributed to better and faster training of hundreds of vascular specialists worldwide.”
“He developed one of the first ultrasound companies and contributed to the development of a preservation chamber for heart transplantation. His role in introducing one of the endovascular aortic grafts in the US has been essential, and he is a founder and medical director of this device company. Over the past 10 years alone, he was involved in founding three organizations dedicated to advancing the practice of vascular surgery. One develops and manufactures endoluminal grafts; the other is a Translational Research Center, dedicated to preclinical and clinical research in new and developing technologies. And more recently he started a corporation devoted to the prevention and management of cardiovascular disease, with an emphasis on non-traditional medicine. He is founder, Past President, and Chairman of the Board of the International Society of Endovascular Specialists.”
“Ladies and gentlemen, for his many contributions to innovation in endovascular surgery and for improving the education of generations of vascular surgeons and endovascular specialists, it is a distinct honor and privilege to present the 2013 SVS Medal of Innovation in Vascular Surgery to the Medical Director of the Arizona Heart Foundation and the Founder of the Arizona Heart Institute, Dr. Edward B. Diethrich.”
The entire audience stood and applauded as the President presented me the award; it was a special moment in time. “Thank you, Dr. Gloviczki, for those kind words,” I said as I accepted the award.
“Thank you, Peter, and thank you society members. I feel humbled by this award because as I look out into the audience, I can see many friends who have helped me and contributed greatly to whatever success I have had. We just heard a wonderful lecture about the innovation and advancement of technology over the past years. I was indeed involved in that evolution. I started 7 or 8 companies involved in various innovative approaches to diagnosis and treatment of cardiovascular disease. But I think the award you have presented to me today, which I very much appreciate, is not an award for me personally but rather an award for all of us who over the years have been working toward moving in a different direction. For a number of years, I was on the Board of the Vascular Society and I had to sit in the corner because people didn’t like me very much. They would say, ‘Who is that crazy Ted Diethrich who is out there trying to teach us something about endovascular?’ Well fortunately, that all changed, and I believe the wonderful thing in accepting this award is that I am really accepting it for all of us vascular surgeons, all of you and the society as a whole, because together we have moved forward in a very progressive way.”
“We have together taken the new challenges of surgical transition into less invasive endovascular approaches for the future. I believe that is our future. I thank the society and the nominating committee.”
All I could think about was the ride I had been on since I was the first ISES representative on the SVS Board for 3 years. It was a time when very few members would talk to me, believing that I was trying to sabotage vascular surgery. But there I was, at the annual meeting of SVS, where at least my colleagues appreciated my small contribution.